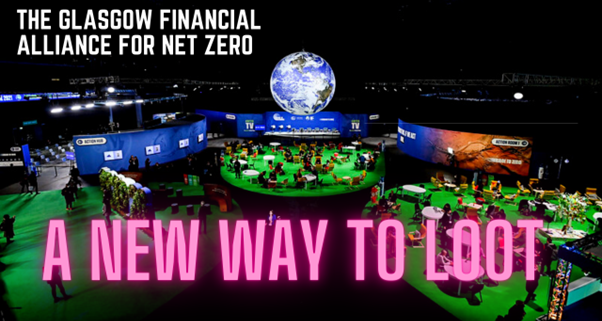 WHO WANTS TO BE A ‘NET ZERO’ TRILLIONAIRE?

The Glasgow Financial Alliance for Net Zero (GFANZ) recently announced the creation of an Asia-Pacific (APAC) Network in Singapore to help the region “address the transition to net zero”.

For those not paying attention, GFANZ is the new ‘world bankers alliance’ which committed $AUD176 trillion towards building a new “net zero” economy at last year’s COP26.

It is the brainchild of Mark Carney, John Kerry, billionaire Michael Bloomberg, the Rockefeller Foundation, Jeff Bezos and Bill Gates, and its members include over 450 of the world’s biggest banks, asset owners, insurers and fund managers.

Under the guise of “net zero” and ‘saving the planet, this conglomeration of global capital say they want to create a whole new financial system with total, centralised control held by them.

In order to bring it all about, GFANZ have created “country platforms” which they describe in typical Davos style as a mechanism for ‘stakeholder capitalism’ and “public-private collaboration”.

By their definition, these platforms will “convene and align stakeholders – including national and international governments, businesses, NGOs, civil society organisations, donors and other actors – around a specific issue or geography to agree on and co-ordinate priorities around”.

The power of all those trillions will be used to force national governments into launching whatever projects, policies or investments GFANZ deems necessary for that country to ‘reach net zero’.

That’s what John Kerry and co-Chair Michael Bloomberg mean when they talk of “needing national governments to create the necessary conditions so these investments can take place”.

Essentially, “stakeholder capitalism” models give global capital a seat at the table when it comes to national decision-making, as well as the formulation of laws and regulations around their activities.

It will be they and they alone who get to decide who gains access to this $176 trillion they’ve created out of nothing, and what its used for in each country.

Of course everything will be cloaked in the usual ‘green’ collectivist propaganda about needing to ‘save the planet’.

But the reality is, if we go along with this, we won’t be saving the planet, we will be handing it over on a silver platter to a billionaire-bankster cartel, and there’ll be no getting it back.

That the ‘left’ can’t see what a huge land, resource and power grab this all is by global capital, is simply astonishing.