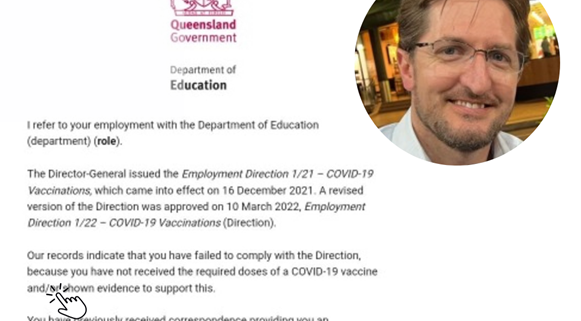 An estimated 1000 Qld Teachers received an extremely harsh ‘show cause’ letter this evening from David Miller, the Education Department’s Executive Director of Early Learning and Development.

Some of you will recall that Miller, the Education Department’s so-called “integrity unit” boss, sent a string of “childish emails” from an employee’s computer in 2020 and escaped punishment despite a complaint against him being “substantiated” by the Crime and Corruption Commission.

Miller was let off at the time, but he clearly has no intention of showing Queensland’s suspended teachers the same consideration, despite his own offences being worse than anything these long-suffering teachers ever did!

Miller’s “terse 10 page letter”, as the Courier Mail called it, contains multiple threats of “disciplinary findings” against the teachers for failing to comply with the State’s mandate.

It accuses them of breaching the government’s vaccine directive, and lists 17 points of so-called “evidence” against them.

“I am providing you with a period of 14 calendar days from the date of this letter to show cause why disciplinary findings should not be made against you,” Miller wrote.

The letter ends with a shocking instruction that forbids the teachers from discussing anything to do with the whole process with anyone, whether on social media or with “ANY OTHER PERSON apart from their legal representative or union!!

That instruction is a disgrace in a supposedly free country.

It ends with a fatuous statement acknowledging that all this may “impact your human rights”, particularly “your right to Take part in public life and Freedom of thought, conscience, religion and belief.”

Miller says he has concluded ALL those inalienable human rights are “OUTWEIGHED”, by “the requirement to provide you with procedural fairness prior to determining whether you are liable to discipline, and there is no less restrictive way reasonably available to comply with the requirements of the Act and the Discipline Directive.”

Come again?  “Outweighed” by WHAT EXACTLY?!

If anyone can translate that load of gobbledy-gook, please let me know.

The teachers, who are still waiting to be shown the long-term safety data, associated risk assessment and evidence for why schools were reclassified as ‘high risk’ settings, must be devastated.

Many hoped the mandates would be dropped soon.

Even the NT and WA governments have announced the end of teacher mandates from 15 June.

New South Wales and the ACT dropped their mandates in May, and SA in March.

So why is Queensland, the only state doing this?

It is an incredibly cruel thing to do to a group of people who many, including myself, consider the best and bravest teachers in the world.

My thoughts and prayers are with every single one of them tonight.

Welcome to the Fourth Industrial Revolution

A new way to loot
Scroll to top