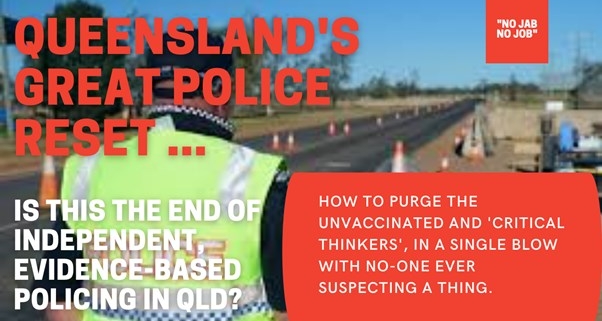 The coming “Great Police Purge” will drive out many critical-thinking, evidence-based police officers with good instincts. George Christensen has an excellent Facebook post up today, about a number of serving police officers who have told him they are being forced to either resign quietly or face disciplinary charges when the deadline for getting the ‘jab’ ends next month. Presumably, any refusal to resign by police will also mean the loss of their entitlements and benefit payments as well.
Clearly the QPS is hoping to purge all its non-compliant workers under cover of darkness, with threats, incentives and watertight confidentiality agreements. If they succeed, it will be win-win for the government, with the public never knowing exactly how many good police officers were lost in this great purge of “the unvaccinated” from the workforce. This creation of what amounts to a new ‘leper class’ within our borders, banishing them to second-class status and stripping them of their rights just seems so cold-blooded and dangerous, it is hard to believe it is actually being allowed to happen in this country.
The Post also contains a very moving letter from a Qld police officer of two decades’ service. He describes himself as a “critical-thinking, evidence-based” officer, who has always relied on “good instincts” and “gut feeling” to guide him in his personal and professional life. In other words, just the sort of person the “powers that be” are hoping to rid themselves of, I imagine.
The letter sends an important message to those shocked by some recent police actions, saying “We SEE YOU and We HEAR YOU” and “we are doing everything we can to right the ship”.
“There are good police that still serve the people and not agendas” he writes. “I know of many other police and their families who feel the same as you, so please don’t lose hope and faith, we are fighting.”
The letter recounts how, in a stunning act of treachery, the Police Union has led the pack when it comes to vilifying “those members who refuse to be vaccinated”.
They have been active in also stirring up hate and division within previously harmonious work groups, by saying things like:
“(WE) FULLY SUPPORT THOSE POLICE WHO DO NOT WISH TO WORK WITH OTHER UNVACCINATED QPS STAFF”.
It is a very sad letter, with the officer saying that he and his family’s lives “are in ruins right now” as they are struggling to come to terms with “losing everything we have worked so hard for”.
“My wife spent the whole day, two days ago, sobbing on the floor trying to come to terms with what is actually happening,” he writes.
“It’s hard for me to comprehend that everything going on is said to be for health, when families like mine are being torn apart”.
Read the full letter here:
George Facebook Post
September 19, 2021/0 Comments/by admin
https://www.kickstartqueensland.com.au/wp-content/uploads/2021/09/210920-George-on-police.jpg 338 602 admin https://www.kickstartqueensland.com.au/wp-content/uploads/2020/06/KQLD_logo.png admin2021-09-19 20:36:582021-09-28 05:32:07The Great Police Purge
0 replies

Future of the union movement questioned
Scroll to top