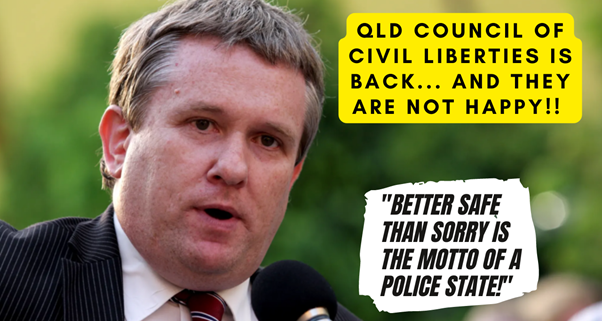 A BIG WELCOME BACK TO THE QCCL – WE MISSED YOU GUYS!!

It was a long time coming but the Queensland Council of Civil Liberties finally came out swinging this week with a blistering attack on the Government’s new Bill extending its use of ‘emergency powers’.

Many Queenslanders, including myself, were disappointed when the QCCL seemed to be M.I.A. at a time when civil liberties were under threat as never before in the State’s history.

It was therefore a pleasant surprise to read QCCL’s excellent submission opposing the new Bill, topped off by a barn-storming performance at yesterday’s Hearing (link below).

The QCCL President said in his submission that:

“Freedom has enormous value in our society and that includes the freedom to take on some risk.”

There is now a real danger that these extraordinary powers are becoming ‘normalised’:

“These are the most Draconian powers that have ever existed in Queensland, including in wartime.”

“The longer they remain in force the more people will become inured to them with the consequence that they will become normalised.”

“This is entirely unacceptable.”

Mr Cope is scathing at the Government’s misuse of ‘the precautionary principle’ to justify eliminating civil liberties:

“The precautionary principle is a long-winded way of saying “Better safe than sorry”.

“BETTER SAFE THAN SORRY IS THE MOTTO OF A POLICE STATE”.

“It would follow from ‘better safe than sorry’, that all of us ought to be subject to continuous surveillance so that nobody could commit a crime.”

On Mandates, the QCCL President said:

“NO PERSON SHOULD BE COMPELLED TO TAKE THE VACCINE WHO HAS A RELIGIOUS, PERSONAL OR PHILOSOPHICAL OBJECTION TO DOING SO.”

“Anyone who decides not to be vaccinated, is exercising their rights to bodily integrity and to control their own medical treatment. They must be taken to have accepted the risk of being infected.”

Mr Cope also spoke movingly of the impact these powers have had on the young and elderly.

“Older people missed out on hugging their grand kids and simple things like going out to movies or that dream overseas trip.”

“Time is ticking whilst we prevent people from being able to make their own decisions about what risks they are prepared to take given their stage of life or the time that is available to them.”

When the Committee asked why any ‘government would keep emergency powers longer than they were needed’, he was frank:

“Once governments are given powers, they tend to keep them.  That’s just the nature of the Beast”.

Deprivation of liberty
Scroll to top