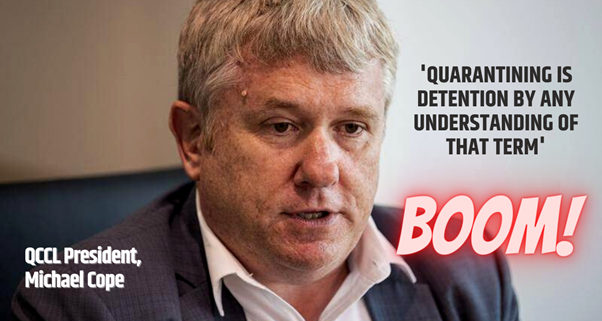 The Queensland Council for Civil Liberties seems to be copping a bit of flak in the comments section of yesterday’s post.

I thought it might be a good time to share an exchange I witnessed last January, when the Government put forward an earlier Bill extending the State’s emergency powers.

On that occasion, the Bill was dealt with by the Health Committee, of which I am a member.

Michael Cope, President of QCCL, appeared before the Committee back then as well, and caused something of a stir by constantly referring to quarantining orders as “Detention”.

The QCCL President told MPs on the Committee that people “ought to have a right to go to a magistrate to contest their DETENTION and certainly they ought to have that right if it is going to be extended beyond a 14-day period”.

“As far as we are concerned, just because it is a pandemic does not mean you lose your right to have your detention reviewed.”

“It is a fundamental principle of the rule of law and human rights jurisprudence that you should have a right to review that detention.”

“As far as we are concerned, it is fundamental.  The fact that it is a pandemic does not alter that”.

Finally, one of the Government members of the Committee could restrain herself no longer, asking Mr Cope in a reproving voice:

It was hard to hide my grin as the Chair swiftly closed the session after the feisty Mr Cope’s no-nonsense response.

Qld Council of Civil Liberties is Back

Mandates must end
Scroll to top