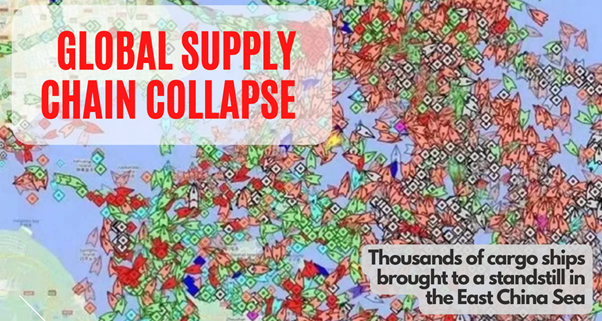 BUCKLE UP AUSTRALIA, AND BRACE FOR IMPACT!

Social media images are showing an unprecedented traffic jam in the East China Sea as thousands of cargo ships have been brought to a standstill outside the port of Shanghai.

Ships can be seen standing all the way out to the open sea, several kilometres away.

Shanghai is one of China’s largest manufacturing centres and home to the largest container port in the world, with a major airport serving inbound and outbound air cargo.

Today, its factories and warehouses are closed, the roads are empty and the city’s port and airport have come to a complete halt.

It’s not just Shanghai either.

In Beijing, Shanghai and Shenzhen, tens of thousands of factories are either shut down or operating at reduced capacity.

Kunshan — a big production centre for electronics— is closed until late April. Part of Taicang, another manufacturing area in Jiangsu province, is also closed.

Volkswagen and Toyota shut down their manufacturing plants in Tianjin last week due to a lack of parts.

Manufacturing hubs in Vietnam and Cambodia are also running out of vital Chinese-made components for their manufacturing.

Pharmaceutical companies in India, who source 70% of their active ingredients from China, say they are running out of supplies.

Within 60 days, stock everywhere is going to run down and it won’t be replaced – not for some time.

Australia is probably one of the most China-dependent countries in the world.

Everything from our cars, agricultural machinery, iPhones, computers, medical equipment and pharmaceuticals, comes from China.

Australia makes virtually NOTHING – nothing useful anyway, and definitely not at scale.

We lost our whole industrial commons to China decades ago, and with it went our collective R&D and our engineering/manufacturing capabilities.

We lost suppliers, skilled trades, and all the product/process design and engineering know-how built up over generations.

Instead, we became a ‘service’ economy.  ‘Services’ tied to the biggest and longest-running housing bubble in history.  All fuelled by debt.

That’s right.  We export iron ore and coal to China for processing into steel, then import it back for our construction industry.

It all happened under the watch of three key Prime Ministers – Bob Hawke, Paul Keating and John Howard

Bob Hawke is dead, but Keating and Howard are very much alive.

I’d say BOTH of them have a lot of explaining to do.

THE PRICE OF LIBERTY
Scroll to top