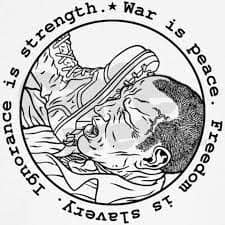 TRANSFORMING AUSTRALIA INTO THE SURVEILLANCE CAPITAL
OF THE WORLD – ONE ORWELLIAN LAW AT A TIME
The Surveillance Legislation Amendment (Identify and Disrupt) Bill 2020 (Identify and Disrupt Bill) passed both houses of federal parliament last week, with nary a peep from anyone. The new legislation grants extraordinary new powers for disrupting the online activities of its citizens, to the Federal Government and its intelligence agencies.
Not only will they be able to disrupt laptops and phones remotely, take down whole websites and servers, no matter where they are located in the world, they can also ‘lock’ out people from all their online accounts. Since C***d, the Coalition Government has passed law after law granting itself, and its various enforcement agencies, enormous powers of surveillance over its citizens. Many of these laws have been sold to Australians as necessary for ‘safety’, but mostly that’s just a pretext for what is little more than a naked grab for more data and more control.
The irony is that many of the threats citizens now face, from ‘cyber-attacks’ to ‘online safety’, only exist because of actions the government itself took which have made us all much more ‘unsafe’. The 2017 TOLA laws were the beginning. They forced tech companies to dismantle all the encryption technology and other sophisticated protections they had put in place to protect our privacy.
Of course, ‘privacy protections’ are anathema to governments now, and ours has waged a ceaseless war with ‘Big Tech’ companies like Facebook and Apple, aimed at removing every last vestige of privacy and protection we had.
The new Surveillance laws follow the passing of the Telecommunications Legislation Amendment (International Production Orders) Bill last month, which gives the federal government the power to enter into top secret, data-sharing agreements with the US Government.
Another alarming piece of legislation is the Online Safety Bill, passed in June, which will give the government even more powers for removing online content it doesn’t like, and to block access to users and enforce stringent verification systems – including face scans and thumbprints.
All these new laws are the creation of the Orwellian Digital Transformation Agency, which is currently hard at work on another Bill. This one will require ALL Australians to submit identification checks before being allowed to comment or engage online
September 2, 2021/0 Comments/by admin
https://www.kickstartqueensland.com.au/wp-content/uploads/2021/09/210902-Orwell.jpg 225 225 admin https://www.kickstartqueensland.com.au/wp-content/uploads/2020/06/KQLD_logo.png admin2021-09-02 10:01:102021-09-07 00:05:00Owellian laws for Australia
0 replies