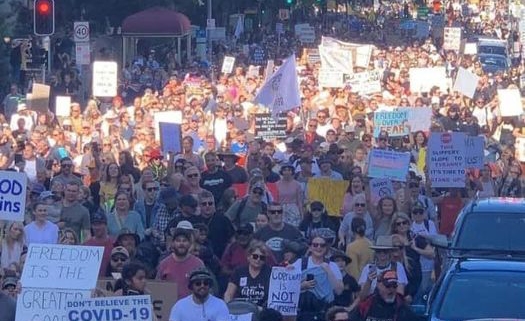 “FILTHY, DISGUSTING & SELFISH” – HOW AUSTRALIA’S ELITES RESPONDED TO YESTERDAY’S MASS FREEDOM MARCHES
On Saturday, hundreds of thousands of people sick to death of the border closures, harsh social restrictions, draconian lockdowns, and home confinement, took to the streets of our major cities, chanting “Freedom!”
The freedom marches were all peaceful and orderly, although there were a few clashes with police, which the media predictably focussed on again and again in their reporting on the event. The media outdid themselves with expressions of sanctimonious outrage. Propaganda was well to the fore with the arrest of a heavily tattooed man featured repeatedly in mainstream news images. That’s the kind of propaganda they know works best – no words necessary, just a few carefully chosen images of anyone in the crowd who looks scruffy or disreputable– it’s a tactic they use often to discredit those who oppose the elites’ agendas and narrative.
What they will never show you – and didn’t yesterday – is all the footage of ordinary Aussie families, tradies, middle- and low-income workers, young students, hard-working small business owners, a big contingent of people with disability and many others who showed up in their thousands to march across Brisbane, Sydney, Melbourne and Canberra.
Instead, reports were filled with Australian elites accusing these ordinary Aussie battlers of being ‘filthy’, ‘selfish’ and ‘disgusting’. Millionaire celebrities joined the attack with a serious of self-righteous tweets, like that of Ben Lee, who was holed up at his Sydney mansion. Lee pompously complained that “while I’m obediently in lockdown with my family in Sydney trying to flatten a curve, you are protesting for your right to fire-twirl #Selfish!”.

State leaders, meanwhile, were virtually salivating as they told us police had issued hundreds of fines and would spend many weeks combing through footage looking for more “violators” to fine.
The NSW Deputy Police Commissioner said police were forming a ‘strike force’ team to root out and punish all the “violent, filthy, risky” behaviour, while NSW Premier Berejiklian, said she was “absolutely disgusted” by the mass gatherings. She also urged anyone who recognized any of the marches to dob them in to police immediately.
From all sides, we heard calls for harsher penalties and restrictions, with one suggestion being strict curfews from 7pm to 7am. The hatred of ordinary people was palpable throughout.
That’s why Queenslanders need to send a strong message that Democracy and Freedom Still Matter, before it is too late. We have over 17,000 signatures but we need a lot more to try and force a debate on the floor of Parliament.
Please sign and KEEP SHARING as much as you can!
Restore Democracy in Queensland petition
July 25, 2021/0 Comments/by admin
https://www.kickstartqueensland.com.au/wp-content/uploads/2021/07/210727-Freedom-march.jpg 340 525 admin https://www.kickstartqueensland.com.au/wp-content/uploads/2020/06/KQLD_logo.png admin2021-07-25 08:01:012021-07-27 08:12:59Freedom march labeled ‘disgusting’
0 replies