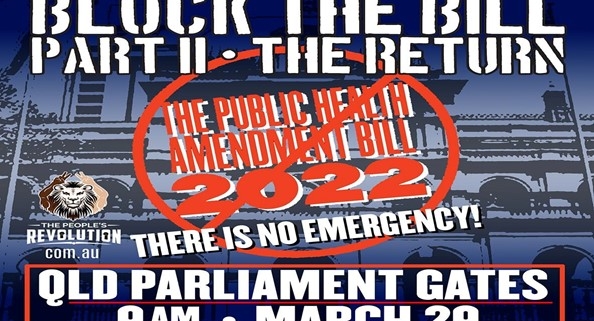 TAKE ACTION TO FIGHT THE EXTENSION OF EMERGENCY POWERS IN QUEENSLAND!

On 18 March 2022, the Governor of Queensland extended the ‘declared’ state of emergency for a further 90 days by regulation.

It was all done with the casual flick of a pen – no discussion, debate, parliamentary scrutiny or accountability.

Such ‘rule by decree’ actions show better than anything else could, how Queenslanders are being ruled over by a government invested with the powers of an Absolute Monarch.

It is vital, however, that people don’t give in to feelings of powerlessness, or stop believing they can do anything to stop tyranny in Queensland.

The ‘declaration’ is, after all, no more than the legal instrument on which all the Government’s emergency laws, powers and measures have been erected, and which are set to be extended for another six months this week.

The government’s use of these powers, in short, has led to the greatest loss of individual rights and democracy in the State’s history.

It is time we rejected all these divisive, unscientific and coercive laws which seek to punish people for their medical choices.

It is also time we rejected this ‘new normal’ of shifting goalposts and rolling emergency measures, ‘just in case’.

I hope EVERYONE who is able to, will join me, together with the People’s Revolution, the Mackay Worldwide Rally for Freedom and others this Tuesday, as we unite to make one ‘last ditch’ effort to stop the Bill.

Freedom, democracy and the future of our children, are at stake.

Forces of tyranny
Scroll to top