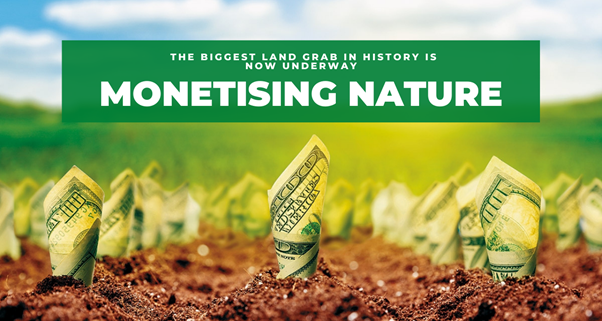 THE PLAN TO SELL OFF AUSTRALIA’S NATURAL ASSETS & RESOURCES, UNDER THE GUISE OF ‘SAVING’ THEM

This, she said, would unlock Australia’s “natural capital” investment potential through an improved measuring and reporting framework.

“Understanding the true value of our natural capital – our soils, water, oceans, biodiversity and spectacular landscapes – presents an enormous economic opportunity and a critical pathway for investment” Ley said.

The document outlines “key initiatives to support the creation of a new global asset class of environmental investment markets and to increase private investment in Australia’s Natural Capital”.

Of course, the ‘propaganda and spin’ fed to the public is that all these financial instruments have been created purely to “preserve and protect” Nature.

Don’t let them fool you again.

The only goal here is to ‘monetise’ nature, not to ‘save’ it.

The group behind the “Natural Capital Agenda” is the Intrinsic Exchange Group (IEG), which is made up of major investors like the Rockefeller Foundation and the Inter-American Development Bank.

“We are pioneering a new asset class based on natural assets and the mechanism to convert them to financial capital … they include biological systems that provide clean air, water, foods, medicines, stable climate, human health and societal potential”.

It begins with identifying a natural asset, such as a forest, agricultural field or lake, which is then assessed, quantified and valued using specific ‘measurement’ protocols.

The protocols were developed by the Capitals Coalition, which is partnered with the World Economic Forum, and various other mega multi-national corporations.

The newly created ’National Capital’ asset class allows specialised companies “to hold the rights to the ‘ecosystem services’ produced on a given chunk of land; services like carbon sequestration, sustainable agriculture or clean water”.

According to IEG, the “capital potential” of “Nature’s Economy”, is worth over $US4 quadrillion.

They pretend that this massive extraction of profit from Nature will help “transition” the world economy to one that is ‘green and sustainable’.

Anyone who believes that, is delusional.

The only beneficiaries of this scam, will be the new owners of Mother Nature.

It will be they who get to dictate to the rest of us, what parts of Nature have value and which don’t.

And that’s the problem…

We are talking about a class of people who, as Oscar Wilde said, “know the price of everything, and the value of nothing”.

No free speech for you Australia