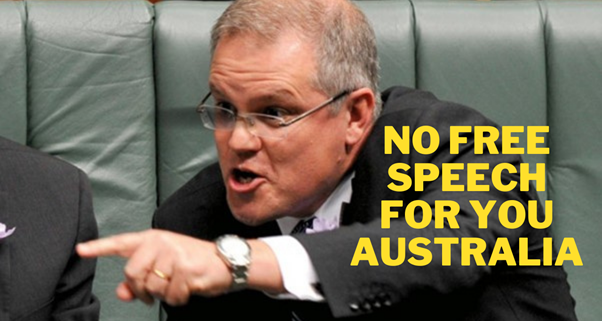 The Federal Government has outdone itself with the new “Social Media (Anti-Trolling) Bill 2021.

The Bill removes every inbuilt protection around privacy and free speech, contained in the original Act.

If passed, the new laws will force social media companies to unveil the identity of anonymous users when presented with a court order to do so.

This means social media companies like Facebook and Twitter will be compelled to collect and verify the “identity and relevant contact details” of all their Australian users, and disclose them to authorities when required.

And so will their much less connected or wealthy competitors in the independent and alternative media platforms, like Parler, Gab, Rumble and Telegram!

Another change will be the new requirement for foreign social media companies with more than 250,000 Australian users, to establish an Australia-based ‘entity’ or subsidiary; placing them under the direct control of our power-hungry government, and its ‘enforcement’ agents.

While Facebook, Google and Twitter may be happy to police its platforms on behalf of the Australian government, it is questionable whether independent platforms like Telegram and Gab, will be.

Telegram in particular, has built a loyal following worldwide for upholding the principle of free speech and protecting its users’ identity in the face of enormous pressure from elites everywhere.

As usual, the pretence for this latest intrusion on the rights and liberties of Australians, is that it is all being done for OUR benefit – as if we are children.

The PM waxed lyrical on the need to introduce these laws, to “keep our online world safe”, for “kids and families” to protect them from the “horrific abuse and harassment and stalking online”.

The hypocrisy is nauseating, especially given the Bill has nothing to do with ‘trolling’ – whatever that actually means – or online bullying.

Even the AG Department’s Defamation Taskforce secretary said that the term “anti-trolling” might be a tad misleading, given the bill’s contents are “about defamation”, NOT trolling, and “it is not intended to address broader types of online harm”.

The right to remain anonymous is fundamental to the right to free speech and to hold dissenting opinions.

It applies every bit as much in the digital world as it does in the physical one.

As the U.S. Supreme Court Justice Brandeis said: “Anonymity is a shield from the tyranny of the majority.”

Anonymity protects the vulnerable citizen from reprisals by government, industry and individuals; reprisals that can take the form of job loss, financial penalty, legal harassment and even physical injury and danger to family.

Unfortunately, the right to remain anonymous has been under steady attack in Australia for two decades now.

This attack has turned into an absolute barrage since February 2020.

Commodification of nature
Scroll to top