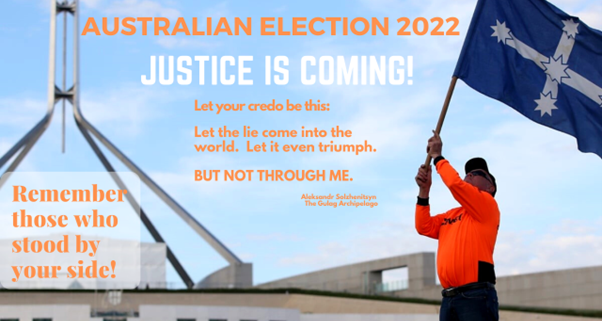 THERE NEEDS TO BE A RECKONING …

In Shanghai right now, nearly 25 million humans have been put under house arrest.

Imprisoned in high-rise apartments, they can’t leave their homes for anything – even food or water.

‘Essentials’ are delivered to them by a nightmarish army of white-garbed, masked ‘health workers’.

The city’s streets and parks are no-go zones and medical-testing is mandatory.

Groups of people are frogmarched to testing sites where anyone testing positive is forcibly taken away and incarcerated in vast prison-like quarantine centres.

Once upon a time, this would have provoked outrage and condemnation from leaders of the ‘free world’.

Governments everywhere, including Australia, are utterly silent in the face of this tyranny.

Something Australians should consider an ominous sign for their own future.

When, during this whole campaign, did we hear a single Minister or shadow Minister, make reference to what has gone on over the past two and a half years?

How many apologised for the part they played, or didn’t play, in that nightmare?

Not a single one.

Even today I find it hard to credit the sheer lunacy of it all.  And cruelty.

I received literally thousands of letters and emails over the past year, many from Australians who have been deeply traumatised by recent events.

Most heartbreaking are those who say how “sad” they feel all the time now.

As though all feeling of happiness or hope for the future has been drained out of them.

Many of these are young people.

By rights, our youth should be brimming with joy, looking forward to a future filled with brilliant career opportunities, overseas travels, new friends, activities and adventure before meeting someone, having children and everything else that goes with that.

There needs to be some kind of reckoning for all this.

My hope is that tomorrow will be that reckoning …

Please REMEMBER all those standing who fought tirelessly, and continue to fight, by the side of the PEOPLE and AGAINST TYRANNY.

SIGNING AWAY OUR SOVEREIGNTY!