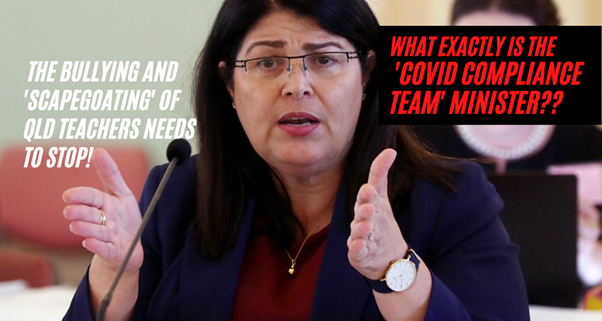 SHOCKING REPORTS OF TEACHERS BEING BULLIED, ‘SCAPEGOATED’ AND ‘GAGGED’ BY SCHOOL AUTHORITIES IN QUEENSLAND

What does Minister Grace Grace, have to say about the widespread accounts of bullying and human rights abuses being committed against teachers in Queensland?

I am getting a barrage of first-hand accounts from teachers in rural and remote areas, almost all of whom are women, who have been suspended without pay and tossed out of their accommodation with almost no notice.

Many aren’t even being given a chance to find alternative accommodation, or pack up their belongings.

One teacher said she was forced to sleep in her car for days, after being frogmarched out of her home by the school Principal.

We are talking about teachers who have been living for years as highly respected members of their communities.

Communities where there has not been a single Covid case and where NO teacher has been found to replace them yet!

Such actions are not just cruel, they are completely pointless as far as public health goes.

City teachers say they are also being prevented from retrieving belongings from their offices – even after hours or over the weekend when schools are empty!

One has vividly described the intense feeling of shame she felt as former colleagues tossed her personal belongings and laptop over the school’s eight foot perimeter fence, while her former students looked on in shock and tears!

The level of inhumanity involved in a story like that is almost beyond words – completely unfathomable.

At the very least, it has revealed what an utter sham all the government’s  rhetoric around bullying and ‘coercive control’ has been.

QUESTIONS THE MINISTER MUST ANSWER:

Why were teachers with full Medical Exemptions, approved by Medicare, suspended with all the other teachers?  Why were they told they couldn’t even work remotely with Distance Education, which has a chronic shortage of specialist teachers?

Why are teachers being sent threatening emails warning of “disciplinary action” if they speak out publicly about what is happening?

Why have teachers been suspended without pay until June, instead of terminated?  Is it to force them to resign so they will lose certain entitlements including the right to sue for unfair dismissal?

Why are suspended teachers being told to direct all their communications via the unknown but Orwellian-named ‘Covid Compliance Team’?

Queenslanders deserve answers to these and many other questions – and not just from their Government!

Many want to know where the Queensland media, judiciary and human rights groups have been throughout all this?

And why the Human Rights Commissioner, the Mental Health Commissioner and  all the other officials paid to protect them, have been silent.

Like Terry O’Gorman, every single one of them has gone M.I.A. when Queensland needed them most.

Something many Queenslanders may find hard to forget – or forgive.