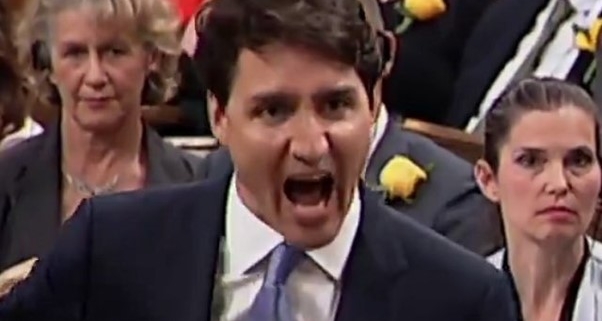 JUSTIN TRUDEAU HAS STRAIGHT UP LOST THE PLOT!

Justin Trudeau over in Canada, is starting to look and sound more like an Eastern European dictator than the Prime Minister of a democracy.

He has now invoked Canada’s ‘War Measures’ powers to unilaterally freeze the bank accounts of anyone linked to the peaceful Convoy protests, without even bothering to go through the courts first.

He is also giving Canadian police “more tools” to imprison and fine dissenting Canadians, and to cancel the vehicle insurance of anyone connected with the demonstrators.

Demonstrators, mind you, who have protested peacefully and simply asked that their country be allowed to return to normal.

But it gets worse …

The increasingly unhinged PM has now BLOCKED all social media posts from inside Canada.

Users can post, but what they post WILL NOT APPEAR on any feeds anywhere if it comes from a Canadian IP address.

Some users have been able to get around the block by using Virtual Private Networks (VPN’s), but Trudeau is already working on a way to stop that as well.

This is what these faux “bleeding heart liberals” and Great Resetters are all about at the end of the day!  Outright tyranny.

As Malcolm X once said:

“Scratch a Liberal and you’ll find a Fascist”.

How right he was …

Click here to watch a brilliant interview with Trudeau’s brother worth watching
Also a link to the wonderful Canadian MP, Randy Hillier

The new front in the War on Terror