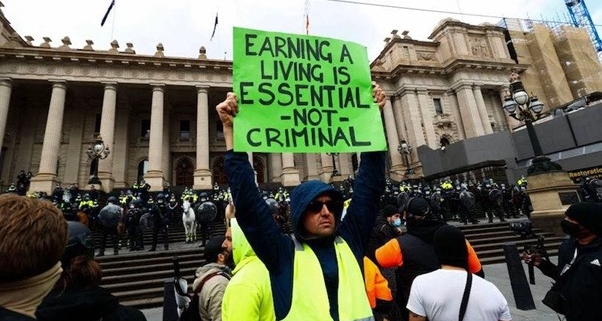 We are witnessing shocking scenes in Melbourne as the “Lucky Country” descends further into despotism. Australians are now watching in horror as their once stable Western democracy disintegrates further into utter chaos and despotism on the streets of Melbourne. Victoria’s heavily militarised and Orwellian-named “Public Order Response Team”, today moved in tight military formation against crowds of protestors, as they fled to the sanctuary of their city’s ancestral Shrine of Remembrance, only to again be chased down by police dogs, shot with rubber bullets and gassed. Crowds that included many elderly Australians and young children.
Across the airwaves, media talking heads, government spokespeople and a host of so-called ‘labor leaders’ swung into gear, working feverishly to ‘quarantine’ and ‘emotionally distance’ the protesting construction workers from the rest of Australia, smearing them as nothing more than “far right extremists” and ‘domestic terrorists’. Clips of the protestors were all carefully edited, framed and editorialised on, in such a way as to create, reinforce and then ram home this narrative in the public mind. The fear being that other Australians, sitting at home, might actually start to feel sympathy, or even worse, make ‘common cause’ with these men, their families and supporters.
How different everything was last year when BLM protestors were rampaging through our streets, defacing public memorials, yelling obscenities and burning Australian flags. Then, our elites were all falling over themselves in the rush to pay fealty and respect to the protestors’ ‘woke’ agenda.
Will anyone ever forget the sight of Victorian police officers kneeling before the screaming, mostly white, hordes, bowing their heads in abject shame and deference. It was like some ritualised act of self-loathing, and a clear sign of our ruling elites’ complete repudiation and contempt for this nation’s history, culture and people. It’s the same ‘repudiation’ and ‘contempt’ we see on their faces today as they all march in lockstep against a group of people they regard as ‘relics’ from the ‘old Australia’ – the Australia they long ago consigned to the dustbin of history.
For all the conservatives out there who have also attacked the protestors, Professor James Allan, summed it up best when he wrote in yesterday’s Spectator:
“..there is nothing in being a conservative that precludes one from thinking that a situation is so bad – because the lawful authorities have gone so far off the rails – that protest and disobedience of the law is fully warranted.”
“Think about this from the point of view of elected politicians who have become way too big for their elected boots, and started to exhibit some of the traits of the despotic, heavy-handed petty tyrant. A citizenry full of those who refuse to practice civil disobedience (or make out that a citizenry of conservatives who think their primary allegiance must always and everywhere be solely to the law and to whatever those with the lawful authority to make legal rules say) is a society that takes the same path … as ‘sheep to the slaughterhouse’.”
September 23, 2021/0 Comments/by admin
https://www.kickstartqueensland.com.au/wp-content/uploads/2021/09/210923-Protest.jpg 404 602 admin https://www.kickstartqueensland.com.au/wp-content/uploads/2020/06/KQLD_logo.png admin2021-09-23 23:11:542021-09-28 05:29:07Despotism in Melbourne
0 replies