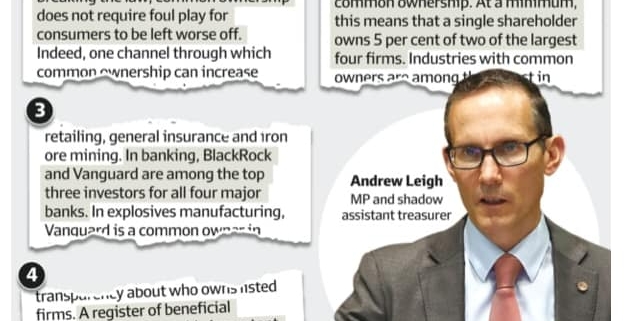 Ever wondered why all Australia’s major companies seem to do and say exactly the same thing? From adopting the same policies on everything, from climate change to ‘Covid’, to spouting the same ‘woke’ mantras, the uncanny synchronicity between them all is starting to defy all known laws of probability.
To properly understand the phenomenon, however, you need to know exactly who is calling the shots at each of these companies – who their ‘real owners’ are, in other words. To begin with, you can pretty much forget the CEO, Board members or even the Founder of a particular company. While these people may be the ‘public face’, responsible for the day to day running of a company, they are not actually the ones ‘in charge’. The real ‘power’ behind a company, ultimately rests with its ‘majority shareholders’.
They are the ones who control all the big, important decisions a company makes, from who sits on the Board to what investments the company makes. It is a power derived largely from the ability of ‘majority shareholders’, either singly or in partnership with each other, to outvote everyone else at the regular shareholder meetings. A quick search on Yahoo Finance shows that the same tiny handful of global entities are listed as ‘majority shareholders’ of virtually all Australia’s major companies, across every sector of the economy.
Suddenly the idea that we live in a ‘free enterprise’ system, with open and competitive financial markets, starts to look very much like a sham.
Former ALP Shadow Treasurer, Andrew Leigh, recently published his research findings, showing all Australia’s top companies are ‘owned and controlled’ by the same handful of global mega-trusts and super funds. Even more alarming, ‘common ownership’ in Australia can actually be narrowed down even further, to JUST THREE GLOBAL ENTITIES – BlackRock, Vanguard and State Street.
These three foreign-owned mega-corporations, own controlling shares, in all of Australia’s big corporate players, as well as all their main rivals as well. They are ‘majority shareholders’ for both Qantas Airways AND Virgin, Woolworths AND Coles, News Corporation AND Nine Entertainment Holdings – so what appears to be ‘competition’ and ‘choice’, is actually, anything but.
They also own controlling stakes in Transurban Group, Telstra, CSL, Wesfarmers, Sonic Healthcare, the Big Four Banks, insurers QBE and Suncorp – to name just a few.
All three are tightly interlinked, with BlackRock and State Street, both owning ‘majority’ holdings in each other.
But the biggest ‘majority shareholder’ of BOTH, turns out to be VANGUARD!
So who owns Vanguard? No-one knows.
As one of those shadowy private trust-type companies, it is exempt from all disclosure laws.
Its ‘owners’ or ‘ultimate beneficiaries’ are completely hidden – from both the public AND governments!
The Federal Government has set up a Committee to look into the issue of “common ownership and capital concentration in Australia”, with some experts saying it could be a problem.
‘Ya think’??!!
September 15, 2021/0 Comments/by admin
https://www.kickstartqueensland.com.au/wp-content/uploads/2021/09/210915-ownership.jpg 524 630 admin https://www.kickstartqueensland.com.au/wp-content/uploads/2020/06/KQLD_logo.png admin2021-09-15 04:06:122021-09-17 04:12:20Who owns Australia?
0 replies

Underground mine collapse
Scroll to top