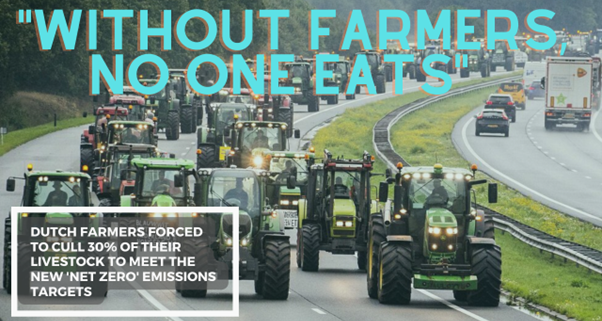 THE WORLDWIDE ASSAULT ON TRADITIONAL FARMING AND AGRICULTURE HAS OFFICIALLY BEGUN!

I hope all Queensland farmers are taking note of what is going on in The Netherlands right now.

For days there has been a complete mainstream media blackout on the story, but finally news of the extraordinary revolt by Dutch farmers over the country’s new ‘Net Zero’ farming laws emerged yesterday.

The new regulations aims at slashing nitrogen oxide emissions 50 to 95 percent, depending on the province, by 2030.

To comply with the new limits, Dutch farmers will be forced to cull (kill) 30 per cent of their livestock.

An estimated 5,000 farms will be wiped out immediately, especially those near Holland’s ‘protected areas’, where the levels have been reduced a staggering 95 percent.

“The honest message … is that not all farmers can continue their business,” the Dutch Government said smugly when announcing the new laws.

This is beyond stupidity.

The idea that Dutch farmers are producing so much nitrogen, a gas that has NO EFFECT on global climate, that a third of the country’s farms must be shut down is absolutely insane.

So insane, in fact, that fifty thousand tractor-driving, furious Dutch farmers have brought the country to its knees over it.

It’s now impossible to cross the border with Germany because farmers, truckers and other allied workers have blocked all the highways with tractors, trucks, mounds of manure and hay bales.

Giant tractor chains, meanwhile, are blocking access to the country’s 20 food distribution centres, while fishermen, sympathetic to the protest, have blocked most of its ports.

The Dutch media are of course trying to paint the farmers as “far right-wing extremists” and “domestic terrorists”, but so far their words are falling on deaf ears.

The Dutch people are backing the farmers and their protest to the hilt!

The farmers say they have blocked highways, ports and supermarket distribution centres, to make the point that without farmers, no one eats.

They aren’t kidding either.

The Netherlands is the world’s second biggest agricultural exporter in the world and the largest meat exporter in Europe.

That means ALL of Europe will suffer.  Food shortages alone will be crippling.

Any Australian who thinks this doesn’t affect them are in for a shock when similar measures are imposed here – and believe me, they will be!

Too many people have allowed their heads to be filled with green fairy tales when it comes to this “transition” to ‘net zero’.

Most have no idea of the enormous costs and pain involved.

At a bare minimum, it is going to mean less farms, less livestock and a lot less food!

Point of view
Scroll to top