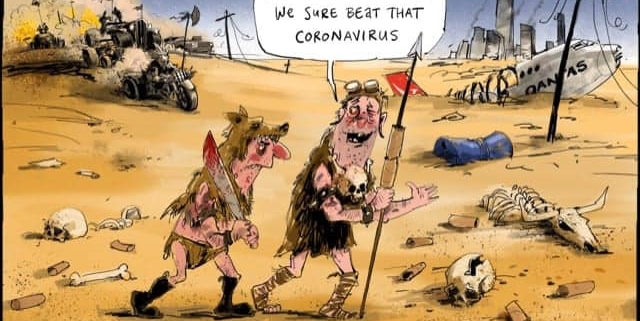 Stephen Andrew statement on mandates destroying healthcare
Yesterday was ‘D-Day’ for Queensland workers under the State’s coercive jab edict. The Premier was hard at work all last week, spreading as much fear and panic as possible.
“A cyclone is coming, it’s coming to every corner of the state”, she said ominously.
“IT IS COMING TO PLACES IT’S NEVER BEEN BEFORE AND IT’S COMING SOON”.
The only ‘cyclone’ most of us could see, was the one about to hit our healthcare and service industries as a result of all the mass resignations and sackings of its skilled and experienced workforce. You only had to see all the trucks lined up at the border for days at a time, as drivers waited for test results to come back rather than be jabbed, to know there were far less people willing to comply than the government or media would admit.
Many drivers have already walked off the job or retired early, leaving company execs unable to fill highly paid jobs of $140,000 plus per annum. Giant retailers like Woolworths and Aldi have issued their own jab orders, which many predict will cause mass labour shortages within the sector as we head towards Christmas.
There are similar stories across all of Queensland’s key frontline industries, including aviation, the bus/rail/ferry service sector, and even mining. Most shocking, however, has been the thousands of workers in healthcare, who have already quit or taken early retirement. Thousands more are sitting at home, awaiting the outcome of their applications for exemption. Even more faced the prospect of disciplinary action and being shut out of their workplaces today.
This wholesale sacking of some of the State’s most experienced and critical workers has the potential to become one of the worst man-made disasters in the State’s history. All of which makes it doubly strange that so many of our political and corporate overlords seem “weirdly at ease” with all the havoc they are causing. Almost as though they were expecting it – possibly even planned for it – to happen.
It actually makes sense when you think about it. What better way to destroy the ‘old order’, than by sending a wrecking ball through the old one? What better way, moreover, to introduce a new system, all ready and waiting, to replace it. A system – like Telehealth and self-service checkouts – that you have spent hundreds of billions over many years to build. A system of service delivery that is fully automated and driven by AI, robotics, digital payments and algorithms. And with no more costly and bothersome human beings to worry about.
Didn’t you ever wonder why elites were always banging on about the need for “innovation”, “smart cities” and the new “digital economy”?
Well now you know.
November 2, 2021/0 Comments/by admin
https://www.kickstartqueensland.com.au/wp-content/uploads/2021/11/211102-mandates.jpg 410 640 admin https://www.kickstartqueensland.com.au/wp-content/uploads/2020/06/KQLD_logo.png admin2021-11-02 02:36:202022-04-11 04:52:05Mandates destroying healthcare
0 replies

The compassionate Left
Scroll to top