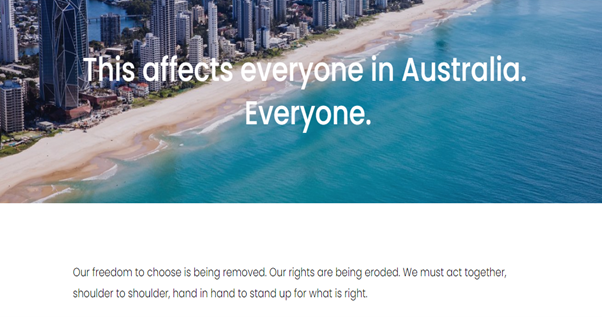 ANOTHER BIG WIN FOR THE ANTI-MANDATE CAMPAIGN

Another big win for the Anti-Mandate Campaign yesterday, with the Gold Coast City Council reversing its earlier position on imposing a ‘no jab, no job’ policy on its workforce.

Over 400 Council workers stuck to their guns and refused to give up their right to bodily autonomy.

The gutsy workers banded together, calling themselves the Gold Coast Council Pro-Choice Alliance group, and engaged human rights lawyers to take their fight to the courts.

Fortunately, this will no longer be necessary after CEO Tim Baker announced yesterday that the Council had decided to can its earlier, and deeply unpopular, decision to impose mandates.

Mr Baker said the Council had received a new and updated risk assessment on “the consequences of being infected”.

The re-assessment found that “for most people who test positive for Covid-19, only flu-like symptoms develop which can be managed with non-prescription pain killers such as paracetamol”.

Mayor Tom Tate, who admits to being “pro-choice”, told the media:

“I’m pleased that everyone can come back to work and the main thing is the crucial services such as waste and water are now secure”.

Of course, those ‘brave defenders of truth and justice’ in the mainstream media are frothing at the mouth over the decision.

According to the irate Gold Coast Bulletin:

“Vaccinated staff (are) furious at being seated next to openly unvaccinated colleagues.”

Even the outlet’s ‘Opinion Poll’ question dripped with malice:

“Should people be FORCED to work with unvaccinated colleagues?”

Yeah, no propaganda or bias in that wording!

Throughout this whole ugly episode in Australia’s history, the media have been relentless in their use of propaganda and ‘weaponised language’ aimed at creating as much social division and enmity over mandates as possible.

However, since the hugely popular and successful Trucker convoys, both here and in Canada, I have noticed there has been a real shift in the popular mood when it comes to mandates.

People no longer seem so interested in demonising and persecuting their fellow citizens, many of whom are their neighbours, friends, co-workers and even family members.

Congratulations to all the Gold Coast Council Pro-Choice Alliance workers, who stuck by each other and stood their ground against the forces of medical tyranny.

As their website states: “This affects everyone in Australia.  Everyone”!

Click here to learn more about the CoGC Pro-Choice Alliance