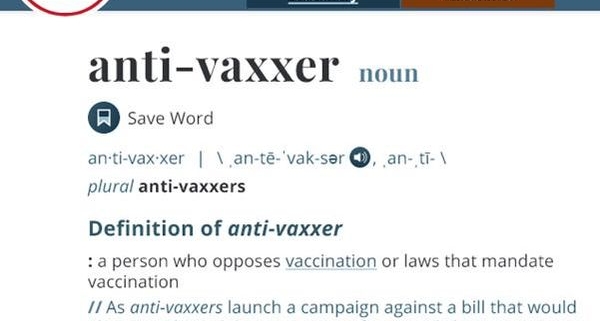 Merriam-Webster, the world’s most used dictionary, is at it again, redefining our words and language to better fit the globalist narrative.
The dictionary, is no longer published in “book” form and is purely an “online database” which as CEO Rodney Powell has commented, allows for words and their “fluid meanings” to “evolve over time”.
Recently, Merriam-Webster has changed its definition for the term “anti-vaxxer” .
The new definition now includes, not just people who oppose vaccines, but anyone who is against vaccine mandates and passports as well.
The definition on Merriam-Webster’s website is:
“anti-vaxxer” – means “A PERSON WHO OPPOSES VACCINATION OR LAWS THAT MANDATE VACCINATION.”
It’s not clear when the company made the change, but many online bloggers only noticed it last week, for the first time.
Merriam-Webster also changed its definition of “racism” last year, to include “systemic oppression” of one racial group by another.
This revision was made at the request of BLM, to prevent anyone being able to claim they weren’t racist because they didn’t consider themselves to be racially superior to another race (the old definition).
Merriam-Webster also changed the definition of “vaccine” in January, making it more ‘user-friendly’ to the new mRNA-gene therapy shots.
The term “anti-vaxxer” is a relatively new word, having first entered the Merriam-Webster dictionary in 2009, when the globalists had their first go at vaccinating the whole world during the H1N1 ‘Swine Flu’ pandemic.
‘Anti-vaxxer’ is now a form of ‘hate speech’ which is used widely by Australian politicians and corporate media to demonise and discredit anyone who chooses not to receive the mRNA vaccines.
Now those same hatemongers will be justified in using the same slur against anyone who is opposed to vaccine-mandates and passports, regardless of their vaccination status.
Incredible isn’t it?
To paraphrase George Orwell:
“Every record is being destroyed or falsified, every book rewritten, every picture is being repainted, every statue and street building is being renamed, every date altered.”
“And the process is continuing day by day and minute by minute. History has stopped. NOTHING EXISTS EXCEPT AN ENDLESS PRESENT IN WHICH THE PARTY IS ALWAYS RIGHT.”
No wonder they are doing everything in their power to get rid of hard copy books and put everything online!
November 29, 2021/0 Comments/by admin
https://www.kickstartqueensland.com.au/wp-content/uploads/2021/12/211128-language.jpg 512 600 admin https://www.kickstartqueensland.com.au/wp-content/uploads/2020/06/KQLD_logo.png admin2021-11-29 22:04:062021-12-01 22:09:52Weaponised language
0 replies