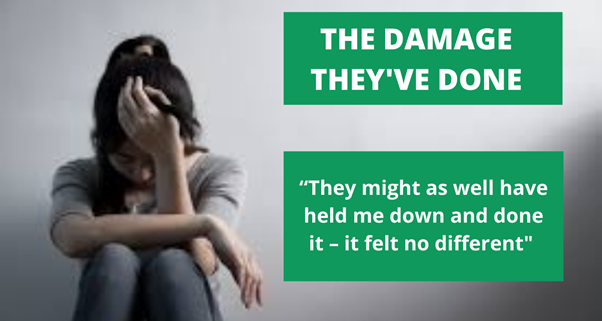 THOSE WHO WERE FORCED, SPEAK OUT ….

THE WRITTEN TESTIMONIES FROM TEACHERS WHO WERE ‘FORCED’, SHOULD DISQUALIFY ANY MEMBER OF THE QLD GOVERNMENT FROM EVER UTTERING THE WORDS ‘COERCIVE CONTROL’ AGAIN!!

Here are a few more excerpts, this time I have taken them from the accounts written by Queensland teachers who were forced into receiving the injections against their will.

As you can see, many of them have been left psychologically traumatised as a result.

In some ways their suffering has been even worse than those who were purged for non-compliance.

“It was just gut-wrenching when I realised, I had no choice but to get the jab or be sacked after 22 years of teaching.  I don’t think I’ll EVER get over it”.

“The stress of being forced, when I was so strongly opposed, …and then contracting Covid TWICE, despite being double vaccinated, has been almost too much to bear.  My quality of life has been destroyed…”

“I was forced to get vaccinated to keep my job and pay the mortgage.  It has impacted my well-being in so many ways…I feel detached from my work now and alienated from my co-workers”.

“I have witnessed distressed colleagues, who have official medical exemptions, being subjected to the most inhumane treatment, just so they are allowed to keep working. They are completely segregated from the other teachers and forced to eat lunch alone.”

“I have not lost my job because I complied/was coerced, but dear friends and colleagues from my school have – they were shamed, lectured, belittled told not to believe “everything they read on the internet”, or “just go get it!”.  Or “I could hold you down and give it to you myself”. Now that they are gone, it’s like radio silence!  LIKE TEACHERS WHO HAVE TAUGHT AT OUR SCHOOL FOR OVER 10-30 YEARS JUST NEVER EXISTED, THEY ARE NOT SPOKEN ABOUT.”

“Our staff holes have been plugged with fresh graduates, our HOD and deputies are all acting in their roles … The whole culture of the place is altered and it’s uncomfortable working there.  I live in fear of the booster being mandated because I will not be coerced again, and I don’t want to lose my 20-year career that I love with all my heart.”

“I feel like I have betrayed my principles for money…  my life feels like it’s in tatters.  I feel disgust and shame (with myself) over this.”

“In the end I was coerced like so many others.  The complete loss of my own free choice still weighs heavily on me. I am not sure I will input the 110% I did in the past”.

“I feel totally powerless in my own country and my own home.  I feel powerless to protect myself and my family …I feel oppressed living in what I once thought was a free country.  I was forced to do this to keep a roof over my family’s head, put food on the table, and so that my children will NEVER have to go through this themselves and potentially have their own health affected.”

“Being coerced into doing something you don’t want to do is terrifying and humiliating.  After studying for four years and finally landing a contract job, I was forced to choose between my career and my morals/beliefs.  It has taken a huge toll on my mental health.”

“I was harassed daily and made to feel like a criminal by my principal/colleagues until I gave in.  I have lost ALL faith in the government and education profession”.

“I hope these people rot in hell for what they have done to me”.

“Doing it went against everything I believe in.  I am so upset I was forced like that”.

“They may as well have held me down and done it – IT FELT NO DIFFERENT”.

Man or Monster?
Scroll to top