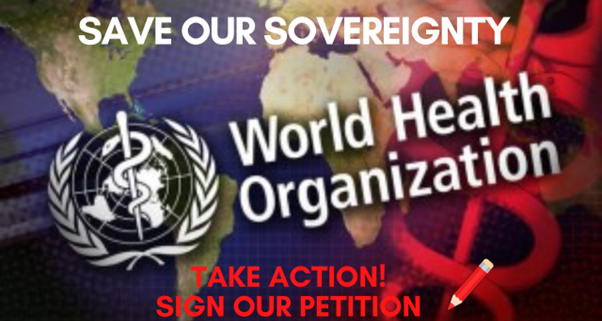 WHAT IS AT STAKE…

By signing the IHR Amendments at next week’s annual meeting of the World Health Organisation (WHO) in Geneva, Morrison and/or Albanese will have ceded sovereignty to the WHO across a wide area of Australia’s domestic governance – including health, the environment, intelligence, law enforcement, surveillance, digital identity and the economy.

If the last two years have taught us anything, it’s that no area of human activity is safe from the clutches of those determined on “keeping everybody safe” – whatever the cost!

The powers being handed over to WHO are the same powers that Victoria’s Dan Andrews awarded himself last year.

Only this time, it is happening at a global scale and Australians don’t get to vote, or have a say, on any of it.

This latest power grab by our maniacal globalist elites, had its beginnings in 2017, with the set-up by Bill Gates and the sinister Wellcome Trust of CEPI, the Coalition for Epidemic Preparedness Innovations.

CEPI immediately convened a series of ‘behind closed doors’ discussions on the need for a global health treaty at the World Economic Forum that year in Davos.

Earlier this year, Australians were outraged when the Morrison government handed over $100 million of taxpayers’ monies to CEPI, no doubt in furtherance of its ‘New World Health Order’ agenda.

Why Australians had to pour $100 million into a globalist body which receives billions from the Bill and Melinda Gates Foundation and other vested and corporate interests, was a question exactly nobody thought to ask.

At next week’s meeting in Geneva, Member States will also be discussing proposals for a new multi-billion dollar WHO ‘preparedness’ fund and a $100 billion ‘emergency fund’ to go with it.

That all those billions of dollars, and shiny new powers, will be left to gather dust in the WHO cupboard for long seems highly unlikely.

As someone once said: ‘if you give people the ‘Keys to the Kingdom’, THEY WILL USE THEM!

And this is the World Health Organisation we are talking about, after all.

An organisation with one of the worst reputations in the world for corruption and shadowy insider deals.

A tiny cabal of appointed technocrats over whom there is zero transparency or accountability.

The very antithesis of an open or democratic body.

If either Morrison or Albanese goes ahead and signs away Australia’s sovereignty to such a group, it will go down as one of the worst betrayals any executive government has ever perpetrated against its own people.

Rise of the Elites
Scroll to top