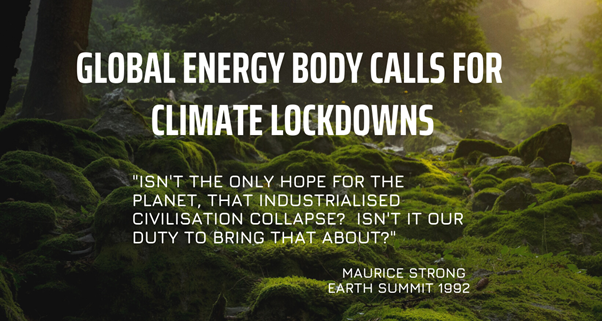 From the beginning, analogies were drawn between Covid and Climate Change which I found alarming.

Green groups and their billionaire funders are known for their strongly autocratic views.  Like all cultists they believe that they know better than anyone else what is best for humanity.

Imagine their joy, therefore, as governments worldwide rolled out a series of tyrannical new laws suspending the democratic process, locking people up in their homes, shutting down businesses, restricting road use and criminalising free speech.

Is it any wonder that those of us who tried to question the ‘reasonableness’ of these laws, were howled down and showered with abuse?

Is it any wonder that so many of them fought the end of lockdowns tooth and nail in 2020?

I mean it wasn’t as if such people actually gave a damn about human health.

No.  It was because they all knew a ‘golden opportunity’ when they saw one.

Right at the outset they understood instantly the precedent that ‘State of Emergency’ laws set when it came to fighting climate change – only their lockdowns would be a lot more permanent of course.

In their eyes, any government with the power to limit private-vehicle use, ration the consumption of meat, impose censorship, close businesses and lock people up, was a government they could really get behind.

Even global governing bodies like the WEF, OECD and IMF, issued broad hints that to achieve ‘net zero’ by 2050, governments may need some form of ‘climate lockdown’ laws.

Now, the International Energy Agency has ‘upped the ante’ by calling for governments worldwide to adopt ‘climate lockdowns’ on the basis that “net zero” won’t be possible unless people are forced to stay home as much as possible.

As the IEA’s “10-Point Plan to Cut Oil Use’ report states:

“Governments have all the necessary tools at their disposal to put oil demand into decline in the coming years, which would support efforts to both strengthen energy security and achieve vital climate goals”.