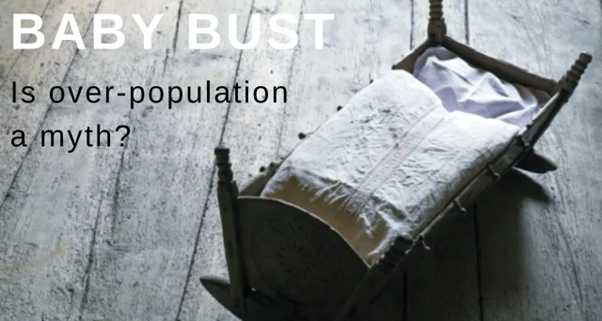 THE ALARMING COLLAPSE IN BIRTHS WORLDWIDE

In 2020, ‘population experts’ predicted a baby boom due to lockdowns.

They couldn’t have been more wrong.

Instead of a baby boom, the world is seeing a gigantic baby bust.

Data for the first quarter of 2022, shows an alarming fall in births from 2021, with some of the most notable being a 23 percent drop in Taiwan, 20 percent in Mongolia, 12-14% in Germany, Estonia, Hungary and Finland.

Despite the plummeting birth numbers and rising death rates, however, the UN’s Secretary General announced yesterday that the ‘exploding’ global population will hit eight billion by mid-November this year.

This, he said, is a “reminder of our shared responsibility to care for the planet” which, he added, “is in peril”.

Overpopulation is one of those “conventional wisdoms”, based on the “everybody knows” argument drummed into us at an early age.

Looking at some of the birth rate numbers around the world, however, many are starting to wonder if the UN and its population models, could be wrong?

Not just a little bit wrong, either, but DEAD WRONG.

As Elon Musk points out, the UN uses a set of deeply flawed computer models to calculate population.  These models have a number of problems, he said, including a ‘baked in’ assumption that if “something didn’t happen in the past, it won’t happen in the future”.

In 2019, the Lancet published a study funded by Bill and Melinda Gates based on figures obtained from researchers living in countries around the world.

These figures were radically lower than those bandied about by the UN.

According to the Lancet study, there are almost no regions of the world – bar parts of West Africa – where women are still having babies at a level needed to maintain their population.

2.1 is the number of children that women need to have in order to sustain a population.

Take the world’s two most populous countries, China and India.  Together they make up 40 percent of the world’s population.

China’s has been well below replacement level for years.

Even ending its disastrous ‘one-child’ policy failed to reverse the trend.

As Canadian demographer, John Ibbitson, put it in his 2019 book ‘Empty Planet’:

“For the first time in human history, we are deliberately culling ourselves by having fewer babies than we need to reproduce”.

Scathing review of the TGA